In a clash of my lawyer and writer worlds, we recently read I DISSENT! Ruth Bader Ginsburg Makes Her Mark by Debbie Levy. 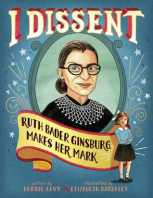 We’ve read a few picture book biographies lately, and we were particularly impressed by the way in which this presents Justice Ginsburg’s life so as to capture the young reader’s attention. The theme of Justice Ginsburg disagreeing, or dissenting, begins on the first page, and reappears every page or two throughout the story. It is not just a recitation of what happened in Justice Ginsburg’s life, but how she responded to it.

The book begins in Brooklyn, New York in 1940, where in families everywhere, one thing was the same:

Boys were expected to grow up, go out in the world, and do big things.

Fortunately for all of us in America, “little Ruth’s” mother disagreed with this expectation. She took Ruth to the library, where Ruth read about girls and women “who did big things.” Ruth discovered that a girl could be anything.

The book explains that as she was growing up, Justice Ginsburg saw and experienced prejudice. She continued to persevere and work toward her goals despite the disapproval of others.

Law student, law professor, lawyer, and—spoiler alert! I don’t want to ruin the ending for anyone—ultimately, Justice of the Supreme Court of the United States. Her career path required persistence and a great deal of disagreeing with those around her.

As a fellow “lady lawyer” (which I say in all seriousness, as I have been called this on more than one occasion), I am grateful for the persistence of women such as Justice Ginsburg. I read the following description of Justice Ginsburg’s law school experience with interest:

Ruth’s law school class had a total of nine women—and five hundred men. She studied mightily and tied for first place in the class. And yet at graduation time no one would hire this brilliant new lawyer.

She was a woman. Men didn’t want to work with a woman.

She was a mother. Men thought a mother wouldn’t pay attention to work.

She was Jewish. Many people were (still) prejudiced.

I have heard similar stories from women here in Nashville. The women who had just a few other women in their law school classes of nearly all men. The women who could not get jobs as lawyers after graduation.

A heartfelt thank-you to each and every one of you for making it possible for those of us who came after you to attend law school and to obtain jobs without our gender being an issue. My law school class was nearly evenly split between men and women, and I don’t know of anyone in my class who felt that she was denied a job because she was a woman.

My husband and I had a little chuckle when the family was talking about the book over dinner yesterday evening, and Alex referred to it as “I Dissect.” We’ve now cleared up that little error. This might be a good name for a biography of a doctor, or medical examiner, though—maybe there is another great woman of American culture in the medical world who Debbie Levy can do a biography about next?