I have a confession to make—I love chapter books. There is nothing like finding a well-written, engaging chapter book (or, even better, a new series!) to read with an emerging reader. Puppy Pirates by Erin Soderberg is one of those fantastic new chapter book series that I am excited to have found. 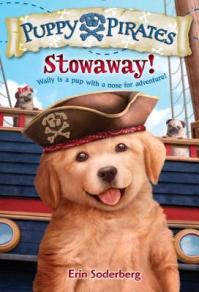 Some people may be wondering why I have this fascination with chapter books. It’s because they are the gateway books to a life of reading. Sure—I’ll admit that it is amazing when a child first notices that the letters on a page form a word, and I loved when my kids read pages from Go, Dog. Go! to me.

But it was another thing entirely when I went into Alex’s bedroom one night to read him a chapter of a book that we had been reading, and he turned to me and said, “oh, I read that part already.” Not only that, but he was able to tell me what had happened in the chapter. He had moved into a world where he could not only read the words on a page, but they made sense to him as part of a larger story. Before we knew it, he was tearing through the chapter book series we had been reading.  And he really hasn’t looked back.

The Puppy Pirates series will undoubtedly become that entrance into the world of reading for many a child.

The first book of the series, Stowaway, introduces us to a puppy named Wally. Wally has left the farm where he was living because he is looking for a life of adventure and excitement, and, more than anything, a place to call home. He runs into some pirates and decides that he wants to be a pirate too. So he sneaks aboard a pirate ship.

On the ship, he meets a boy named Henry, who has snuck on board with the same idea. When Wally and Henry get caught by the puppy pirates, Wally must face four tests to prove that he belongs on the ship.

As Wally completes each of the tests, he makes friends with members of the puppy pirate crew. At the end of the day, following an attack by the kitten pirates, Wally is welcomed as a member of the crew and discovers he has found a home on the pirate ship.

There are currently six books in the Puppy Pirates series, and two more are expected to be published this year.

Ms. Soderberg is also the author of The Quirks chapter book series, many books for tweens, teens and adults (under the name Erin Downing), and some “fun books” under the pseudonyms Kate Howard and Nessi Monstrata. Ms. Soderberg’s website is www.erinsoderberg.com (she has another website for her Erin Downing books). Ms. Soderberg’s website has information about her books and also has some fun stuff like a pirate’s code and a maze.

The Puppy Pirates also have their own Facebook page! You can find them at https://www.facebook.com/PuppyPiratesBooks. Check out the adorable pictures of the real-life inspiration for Wally and other great photos while you are there!